Posted on February 23, 2015 by thegeorgiacitizen

It is painfully obvious that Governor Nathan Deal doesn’t know his ass from deep centerfield when it comes to public education. His so-called “education plan” should be pickled but never used. It is also painfully obvious that a junior staffer must have banged together his so-called “education plan” that is outlined on the Governor’s website. Three of the first five points are the same worn-out global dribble that was spouted by Presidents George H. W. Bush and William Clinton in Goals 2000 before the hellish and ineffective No Child Left Behind and Race to the Top programs were mistakenly ushered in under Presidents George W. Bush and Barack Obama. None of the former global goals were realized, and the latter two programs just wreaked havoc among a profession that formerly was collegial and nurturing within its nature and in its scope.

These punitive so-called “education reform” programs which punish the so-call “failing schools” rather than analyzing what is causing this systematic failure of low performance have been dismal flops, and yet Governor Deal is jumping on the band wagon of threatening to engage in educational deconstructionism, not because there is any clear evidence that charter schools drawing from the same student population significantly increases achievement (they don’t) nor because there is any history of such (there is not, not even in Milwaukee or Baltimore which were the early adopters of such). Quite frankly, the so-called “plan” that Governor Deal has on his official website was obviously handed over to a junior staffer to put together, and this junior staffer apparently doesn’t know the difference between pronouns “that” and “who” (“Increase the percentage of teachers and administrators that are considered effective[.]” Emphasis added). The half-baked call for more students to take a “STEM” curriculum is simply another educational fad which will short-change our students in the humanities, history, civics, arts, music, and physical education. 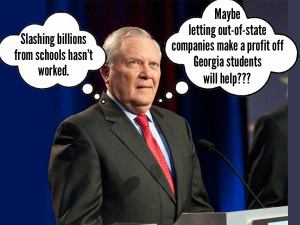 We know that we coined the term “snoopervision” and we are 99% sure that we coined “educrats.” (We never saw it used before we started using it over 20 years ago.) Now we offer you a new one…Governor Nathan ISIS. Governor ISIS is determined to decapitate Georgia’s public schools.

There is not a scintilla of seminal thought in the Governor’s so-called “education plan.” Just a quick perusal of The MACE Manifesto: The Politically Incorrect, Irreverent, and Scatological Examination of What is Wrong with American Public Education (Trotter & Haynes, Big Daddy Publishers, 2014, 615 pages) will show just how silly and shallow and wrong the Governor’s so-called “education plan” is. The above book points out that “you cannot have good learning conditions until you first have good teaching conditions,” and yet Governor Deal is using his so-called education plan to issue a not-so-veiled threat to Georgia’s teachers. He starts out with the wrong premise, viz., that students are not learning because teachers are not teaching. As The MACE Manifesto points out, teachers can teach students but teachers cannot “learn” the students just like physician can treat their patients but they cannot “heal” their patients, and the attorneys can defend their clients but their cannot “acquit” them.

The Governor falls into the same trap of trying to treat today’s educational problems as technical breakdowns (the teacher is not effectively teaching mentality) rather than motivational breakdowns. The MACE Manifesto explodes this notion in a rather long and informative chapter, “On Learning and MACE’s DAM Theory of Learning.” This chapter goes into great detail about how three essential elements are required to be in place before effective learning can take place and virtually every so-called “reform” effort ignores these essential elements, including Governor Deal’s: (1) Discipline, (2) Aptitude, and (3) Motivation. Not all students will learn the same amount of information at the same pace because there are varying degrees of discipline, aptitude, and motivation within each student at each school. It is obvious that these concepts are foreign to the junior staffer(s) who apparently pulled together the Governor’s so-called “education plan.” To actually implement any form of pay plan that is tied to the performance of a teacher’s students to a standardized test is educationally stupid and unconscionable. A system of “merit pay” or ‘value-added evaluations” do not work simply because students are not inanimate chunks of cookie dough floating innocently and harmlessly down a conveyor belt. The MACE Manifesto has another an explosive and lengthy chapter on “merit pay” (“Merit Pay for Teachers: More Bullshit from Bill Gates, Eli Broad, and Arne Duncan,” Chapter 35).

We were way ahead of the curve in The MACE Manifesto in understanding the motivation of mandating the implementation of norm-referenced tests all over the country. By definition, on normed tests, one-half the students score “below the national average.” The motivation of the proponents of Common Core is the privatization of public schools. These folks don’t give a rat’s ass about the kids. It’s all about the money, and we have been boldly saying this for years at MACE. Governor Nathan ISIS is determined to decapitate public education in Georgia…starting with private businesses taking over the so-called “failing schools.”

The Governor’s stated plan to turn over “failing schools” to outside groups which will come in with their hyped-up charter school “opportunities” looks more like a plan to give financial “opportunities” to his supporters to feed on the public trough. This stated desire to turn over our schools to these businesses reminds me much of another chapter in The MACE Manifesto: “The Gates of Hell have Prevailed against the Local Control of Public Education! Rants and Fulminations against Bill Gates, an Anti-christ of American Public Education!” This unfettered rush to undermine and destroy the local control of public education is unconscionable and reprehensible. Doesn’t it seem likely that if nearly all so-called “failing schools” come from schools with students from the same socio-economic-cultural milieu that the problem does not reside with ineffective teaching but with endemic problems beyond a sophomoric attempt to blame the problem on teachers? Why not, as The MACE Manifesto calls for, free up the teachers from ridiculous and rigid mandates so that they can be creative with these unmotivated students, hopefully inspiring these unmotivated students to become learners? After all, if the Governor turns over these schools to private businesses, he is not going to strap these new “educators” in straightjackets of the likes of the draconian and counter-productive TKES. If these new schools of “choice” or “charter” or whatever you want to call them are so wonderful without the rigid, inflexible, and suffocating mandates and rules, then why not free up all of the public schools in Georgia with a fresh wind of freedom and creativity? What is good for the goose is certainly good for the gander.