Fulton Superintendent Robert Avossa has Recommended and the Silly but Dangerous Fulton County Board of Education Has Passed School Board Policies which have Truncated Long Cherished and Enduring Rights of Teachers.

Posted on April 11, 2013 by thegeorgiacitizen

Fulton Superintendent Robert Avossa has recommended and the silly but dangerous Fulton County Board of Education has passed school board policies which have truncated long cherished and enduring rights of teachers.  Among these crazy policies are the right of the superintendent to terminate any new teacher within 90 days (when the teacher is just trying to learn the ropes, so to speak) and to suspend any teacher without appeal for up to 20 days.  The latter exercise can ruin a teacher’s personal and professional reputation, and the former superintendent fiat can destroy a teacher’s career forever before it hardly even begins!  What hubris!  What arrogance! 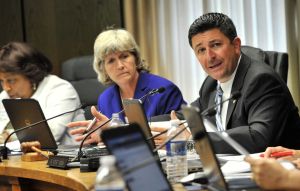 Superintendent Robert Avossa (R) and two members of the Merry Wives of Fulton.  (For the record, the Fulton County Board of Education is composed of seven women and zero men.)  Photo by AJC

This Robert Avossa has to go!  I don’t know which school system in the country would want him when leaving Fulton County, but his little gimlet administrative ass needs to leave town.  Maybe Eli and Edyth Broad can place him again.  He needs to go back to Charlotte-Mecklenburg, back to Pinellas County, Florida, back to the New York-New Jersey area, back to Italy.  He just needs to get the hell out of Fulton County.  See what you did again, Glenn Brock?  Another one of your USDA Grade F superintendent choices…from the Broad Academy.  Hey, Glenn, do you look anywhere except the Broad Academy?  That’s not much of a “search,” is it?

Robert Avossa came to Fulton County with a checkered past from Charlotte-Mecklenburg in North Carolina.  Just recently, the new superintendent up there made a decision to clean up the mess that his department apparently left with the graduation rates which appear to have been inflated under Avossa’s time at the helm.  He’s a Broadie superintendent who came to Fulton County almost having completed the work for his doctorate from little Wingate College in North Carolina.  He strikes me as the perfect candidate who will try most anything that this new breed of Capitalists-Turned-Self-Proclaimed-Educational-Experts would  want him to try, including turning Fulton County into a charter school system.

Avossa’s latest naked grab for power is symbolic of the new genre of superintendents in the United States, who seem to want to be Educational Buddhas who would have all of the classroom educators to have to rub their tummies to receive any blessings or security for their careers.  These latest and disastrous school board policies for the Fulton County teachers remind me of a totalitarian school system where no one has any  vested and protected rights that they can count on for protection against petty, insecure, vindictive, angry, and abusive administrators.  These are the kinds of school systems which you expect in totalitarian societies like China or North Korea but not in the United States.

Just as the Fulton Science Academy High School (a charter school) was deemed a flop, I believe that the Fulton County School System going to a charter school system status will be a complete flop.  It is, in my opinion, just an attempt to get out of having to go by rules and regulations that other school systems have to abide by.  Hey, if not going by these rules and regulations is so good for Fulton County, then why impose these rules and regulartions on the other school systems?  Just recently, the Georgia General Assembly passed legislation exempting the school systems of Gwinnett and Forsyth from having to meet the goals that were set for them for the year 2013 in their IE2 agreements.  Having political friends at the Capitol seems to help, right?

Personally, I would encourage all prospective teachers to stay as far away from the Fulton County School System as they can.  I would also encourage all teachers who are currently working in the Fulton County School System to plan a safe, wise, and hasty transfer to another school system with a contract in hand.  Young Robert Avossa may have played the political-educational game well enough to be selected for the superintendency of a large school system at such a tender age, but, when contemplating his own administrative arrogance,  he would be wise to take the counsel of a sage historian named Herodotus:  “All arrogance will reap a harvest rich in tears.  God calls men to a heavy reckoning for overweening pride.” © JRAT, April 11, 2013.