Sorry, Folks, But, Yes, I Have Indeed Been Right About the Atlanta and DeKalb School Systems Being “Gangsta School Systems” and Right about Beverly Hall, Crawford Lewis, Edmond Heatley, Michelle Rhee, Mark Elgart and SACS, Glenn Brock and His Law Firm, Bill & Melinda Gates, Eli & Edyth Broad and the Billionaire Foundations Which Make Public Education Much Worse Off Because of Their Tinkering and Meddling.

Posted on February 13, 2013 by thegeorgiacitizen

Note: The article below is actually one of the hundreds of posts that I submit and get published by Maureen Downey on The Atlanta Journal-Constitution’s Get Schooled blog. (I am not implying that it is difficult to get published here but just giving credit to the person who actually publishes the posts.) This post was published on the July 26, 2011 blog. I just happened to see it on the internet a few moments ago. With all of the junk that has occurred with the Atlanta and DeKalb school boards, former Atlanta superintendent Beverly Hall, former DeKalb superintendent Crawford Lewis, former Clayton superintendent Edmond Heatley, etc., in the last year and a half, I thought it might be fun to publish this post from the AJC here on my personal blog. I was responding to a fellow poster who went by the name “Sharon Pitts must Go” and who was writing that I had been proven to be right again about these superintendents and situations.

@ Sharon Pitts must Go: All modesty aside (besides, it gets in the way! Ha!), I’ve been right on a number of things. In fact, WHAT things on this blog have I been WRONG on? Really. Which ones?

Let’s see now…Right on Beverly Hall. Right on Systematic Cheating in Atlanta and DeKalb (very public on this). Right on corruption to the core — in fact, called both publicly in several media, “Gangsta School Systems.” This was done long before the traditional media got involved. Right on Mark Elgart and SACS. Phony as can be. SACS stands for Surely Ain’t Committed to Standards, right? Right about the Chamber of Commerce/Piedmont Driving Club folk running the show in Atlanta and propping up Hall. Right about Edmond Heatley being an educational disaster in Clayton County even before he left Chino Valley, California. I will be proven right about Michael Hinojosa in Cobb. Just wait and see. I am also right on Glenn Brock. I think that his firm is terrible on transparency. I think that his firm is also wrong on its apparent advice to school boards on the Complaints Law (O.C.G.A. 20-2-989.5). Hey, don’t forget Michelle Rhee. It appears that I was right all along about this Educational Hypocrite too. 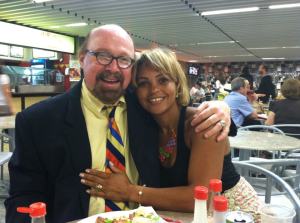 Hey, when you’re right, you’re right. I was right about Luci too. Photo by Elisangela Reis.

Now I wasn’t just right about these people. I was talking openly about them and their actions or lack of actions long before the rest of the public chimed in. But, hey, who’s keeping score?

I am right that most of the hoopla in public education these days is about money. The Educational Industrial Complex involves billions of dollars, and Big Business now sees clearly that there is big money to be made off the largess of the public’s budgets for school systems. Public education has become a racket. It is sad. But, it is ever so true. If the business magnates and foundations and educrats would forget about the money and just let teachers teach (and support the teachers when it comes to defiant and disruptive students), then we would go a long way in solving so much of the mess in the public schooling process. But, this may not be what the business magnates want. It seems that they can make more money when there is a mess. All of the tinkering from Bill and Melinda Gates and Eli and Edyth Broad and the Walton Family and the Federal Government (and in many instances, the State Government) has made the public schooling process in the United States even worse. Tell me one problem that this tinkering has resolved. Just one, O. K.?

1 Response to Sorry, Folks, But, Yes, I Have Indeed Been Right About the Atlanta and DeKalb School Systems Being “Gangsta School Systems” and Right about Beverly Hall, Crawford Lewis, Edmond Heatley, Michelle Rhee, Mark Elgart and SACS, Glenn Brock and His Law Firm, Bill & Melinda Gates, Eli & Edyth Broad and the Billionaire Foundations Which Make Public Education Much Worse Off Because of Their Tinkering and Meddling.