Georgia Schools Have Been Brocked Enough, Elgarted Enough, AdvancEDed Enough. They Have Been Broad Academied Enough! It is Time for Georgia School Boards to Stand Up to These People and Entities and Say, “Enough is Enough!” Forget Glenn Brock. Forget his “Search” Firm! Forget the Broad Superintendents Academy! Forget SACS! Forget the Overblown and Puffed Up and Self-Perceived Education Zeus, Mark Elgart! Hire Your Own Local Talent for Superintendent. Look What DeKalb County is Experiencing Now with its Latest Appointee from Little Lorain, Ohio! Look What Clayton County Experienced with Another Graduate of the Broad Superintendents Academy, Edmond Heatley! Go Local, School Board, Go Local! The Field is Black Unto Harvest! Appoint a Local Educator to be the Superintendent! Reject SACS and Go With the Georgia Accrediting Commission (GAC)!

Posted on February 2, 2013 by thegeorgiacitizen 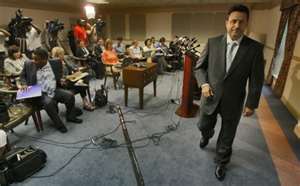 Hey Mark Elgart, Get out of town!

I think that our school systems in Georgia have been Brocked enough! They have been SACSed enough. With friends like “education attorney” Glenn Brock and Mark Elgart, our school systems don’t need any real enemies. (By the way, didn’t the DeKalb School Board realize that they were supposed to hire Glenn Brock, not Brother Wilson? Ha!) The school boards’ cups runneth over with the great “advice” from SACS. The “cure” that SACS offers is much, much worse than any perceived aliments. (SACS’s proposal: We’ll solve the drainage problem in the sewer on 28th Street by blowing up the entire city, OK?) What are the real “ailments”? Potential loss of accreditation? Ha! This is a made-up, artificial ailment. This is only an ailment because Mark Elgart and Gang have decreed that it is an ailment.

Georgia schools boards ought to simply say, “Forget SACS!” Yes, “Forget SACS!” SACS is as full of bull as a Christmas Turkey! There’s no real “standards.” “Standards” that are not equally enforced are not “standards” at all. I have challenged Mark Elgart to a public debate (yes, public TV and everything) for many years now. What would be the topic? Topic: SACS arbitrarily and capriciously applies the standards that it espouses. I take the Affirmative, and Mark Elgart takes the Negative. What does ole Markie have to lose? Ha! He has always demurred. We call this being “a-scared” where I grew up.

The Georgia Department of Education, under the elected State Superintendent, ought to “accredit” all schools in Georgia. Or, if the General Assembly wants to get in on the action, it can pass enabling legislation for a Georgia Schools Accrediting Agency which will operate under the aegis of the State Superintendent.

Georgia also has an accrediting agency which has been around since about 1903, the Georgia Accrediting Commission (GAC). GAC is under the fine leadership of a highly respected educator in Georgia, Dr. Carvin L. Brown. Dr. Brown was the head of the Administration/Leadership Department at the University of Georgia for many years and is held in high esteem throughout the State. Many very fine Georgia educators serve on the GAC Board of Directors. If I were on the DeKalb County Board of Education, I would be contacting GAC, if the DeKalb schools are not already GAC-accredited. The Georgia Statute says that in order to qualify for the HOPE Scholarship, your schools have to be GAC-accredited or SACS-accredited. Some school board finally has to stand up to SACS.

School boards in Georgia ought to tell SACS to kiss their collective ass.

The superintendent search firms are a joke. A real joke. The beat-up, beleaguered superintendents in one locale are simply cleaned up and re-cycled for another locale. Case in point: Edmond Heatley was catching major heat in Chino Valley, California. So, he’s metaphorically cleaned up and sold to the ignorant and unsuspecting Clayton County Board of Education under the non-leadership of Alieka Anderson and Pam Adamson. Who sold him? Why ole Glenn Brock and his personal “search” firm. What a joke! Ha!

In Clayton County, I hear that there is a move under hand to try to get the Chair’s position on the school board elected countywide. Currently, the fellow school board members vote for the Chair. Why this move? Well, are the likes of Glenn Brock and Mark Elgart afraid that Miss Pammie (aka Pam Adamson) will not be able to get re-elected in 2014? Ha! Nah…I don’t think that Miss Pammie will get re-elected from her district in Lovejoy. If I had gotten involved in her race last time, she wouldn’t have gotten re-elected. Just a fact, Jack. Didn’t Bear Bryant say that if it is true, it ain’t braggin’? Ha!

By the way, has anyone figured out yet if “AdvancED” (yes, it put this in quotation marks because I don’t want someone to think that I came up with this squirrelly name) is a for-profit or not-profit firm yet? Where is it incorporated? In Georgia? In Delaware? Where? It owns SACS. SACS technically stands for Southern Association of Colleges and Schools, and it formerly was a nice, quaint little “Good Housekeeping” seal of approval on the school system…until Attila the Hun took over.

When Mark (the Hun) Elgart took over SACS, SACS suddenly quit being a collaborator but a tormentor. In its pick-and-choose Piccadilly-style of application of its so-called standards, it seems to mete out harsh judgments against those who are not politically-connected to certain politicians or lawyers. This is how it appears to me. I have witnessed time-after-time the Fulton County School System, the Cobb County School System, and the Gwinnett County School System ignore and/or violate State Statutes regulating schools in Georgia, but SACS always seem to turn a deaf ear to the complaints about these school systems. For example, the Cobb County Board of Education, under the sage legal “advice” of Glenn Brock (see previous article on this site about Glenn Brock), illegally met behind closed doors and took votes behind closed doors 57 times. Yes, you got that right…57 violations of the Open Meetings Law. A big 57…and what did SACS do? Nothing, if I recall correctly. Nothing. © JRAT, February 2, 2013.