Put Police Officers in Each Public School and Heavily Arm at Least Some of the Staff!

Posted on December 15, 2012 by thegeorgiacitizen

I remember about 30 years ago when people were freaking out about the possibility of having armed police officers in the public schools, but now they are everywhere…about four or five of them at some of the high schools here in the Atlanta area.   One of my former professors, Dr. Eugene Boyce, in his book, The Coming Revolution in Education, which was published in 1983, essentially advocated for at least one police office in each schools.  Dr. Boyce, in his “New Theory” about public schooling, was quite prescient. 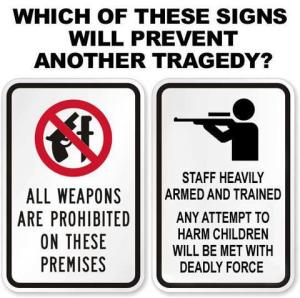 What’s wrong with having a armed police officer at each public school in the United States?  What’s wrong with the administrators of the public schools being empowered (perhaps deputized?) to have loaded weapons secured on campus in case of tragic situations like this one in Connecticut?  Or the one in Arkansas?  Or the one in Colorado?  It will cost a little money, but it will be money well-spent.

We live in a very violent society with very disturbed adolescents.  But, some of our so-called liberals who are for “gun control” and who think that simply putting a label on the front door of a school is going to scare off some crazed individual basically don’t have the sense to pour piss out of a boot.  The only thing that will deter this murderous person is the likelihood of meeting deadly force before he spreads deadly mayhem himself.