Where Will the Calcium Light of MACE’s Focus Turn Toward this School Year? North Hart Elementary School? Just Asking…

Posted on August 31, 2012 by thegeorgiacitizen

MACE was picketing (here even in the rain) about “Systematic Cheating” in DeKalb County before the media ever picked up on the later highly publicized scandal.  This picket was covered by Keith Whitney and Channel 11.

In years past, this laser beam of truth has lit up many a school and school system in the past!  North Clayton High School’s Jo Croom retired in November after several highly publicized MACE pickets – and radio personality Neil Boortz railed against how “mean” MACE was!  DeKalb County’s King High School principal, Skip Nelloms, was picketed by MACE on the first day of school two years in a row.  Shortly thereafter, Nelloms became an assistant principal at Towers High.  The now famous “Pumpkin Picket” of October 31 was staged at Southwest DeKalb High School against Principal Mike Hall, and this picket was covered by Atlanta television as well as The Atlanta Journal-Constitution and The Champion newspaper of DeKalb County.  Several grievances were filed against him and his assistant principal.  Before the Thanksgiving Holidays, he was transferred to the Transportation Department.  At Atlanta’s Douglass High School, two principals did not finish the years after MACE staged pickets, filed grievances and PSC complaints.  Yes, I remember the very highly charged picket against principal Myra Reynolds in North Fulton’s Riverwood High School (even covered by the school’s newspaper and closed circuit television!).  The next year, this principal makes a shocking announcement to the teachers that she would be heading back to Charleston, South Carolina. 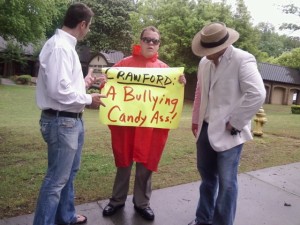 I could go on and on and on.   But, suffice it to say that when MACE begins to focus (like on Clayton County’s Edmond Heatley and Bibb County’s Romain Dallemand), things usually begin to happen.  I have seen this phenomenon happy over and over.  We try to warn our members!

3 Responses to Where Will the Calcium Light of MACE’s Focus Turn Toward this School Year? North Hart Elementary School? Just Asking…