Benighted Boobs as Superintendents! How Do We Get Them? Here’s the Story!

Posted on August 30, 2012 by thegeorgiacitizen

How Do School Systems End Up With Benighted Boobs as Superintendents?  Where Do Educational Jerks Like Romain Dallemand and Edmond Heatley Come From?  I’ll Let You in on Some Secrets.  Here’s How the Process Works.  The ASS Committees Deliver These Broken Educational Souls to Starving and Naïve School Boards Which are Looking for Educational (Test-score Raising) Saviors.  These Educational Gypsies (or, Educational Sluts, if you will) are Willing to Trot All Over the Country (or State) to Secure a Job Where People, Out of Fear and Intimidation, Are Kissing Their Asses.  Apparently, These Gypsy Superintendents Have Such Under-nourished Egos That They Had Rather Have People Fear Them Than to Respect and Love Them.  So Much for Maslow and His Hierarchical Needs!

Oh how the mighty fall!  “Let him who thinks he stands, take heed lest he fall.”  Yes, in my 25 years of representing and advocating for teachers in Georgia, I have seen and interacted with some real arrogant jerks.  They are jerks without a portfolio.  Classic jackasses.  I remember the little fellow – I think that his first name was Shaun – was apparently wreaking havoc in Greene County, Georgia just a few years back.  The Greene County teachers called upon services of MACE not unlike the Macedonian Call in the Bible.  St. Paul wrote that the poor souls in Macedonia called out:  Please some and help us!  We got this call from Greene County.  We hit the road and hit the town, and we went straight to the Superintendent’s Office.  I grabbed a chair and pulled up to the table to talk to the superintendent.  My colleagues state that I was so “rough” with him that they began to feel sorry for him!  For real!  They said that I immediately told him:  “Look here, Shaun, we’re not going to put up with you treating these teachers like this!”

How Did Bibb County End Up With Romain Dallemand?   Google, School Board, Google!

What happened in Greene County?  We met in the home of a two teachers who were married.  They had invited many teachers to show up.  About 40 teachers joined MACE immediately.   We hit the streets.  On three separate occasions, we took the MACE Strike Force to Downtown Greensboro and picketed like hell against Shaun and his administration!  In the third picket, even the townspeople joined in the picket!  They really did.  Of course, the demonstrations were covered in the Greene County newspaper and in the Athens Banner Herald as well.  What happened to the superintendent?  Well, let’s just say that the varnish was off of his self-perceived “shine,” and not too long after this, he moved on to other quarters…in a different part of the country. 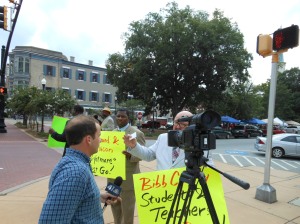 Breaking it down to Macon’s NBC 41 TV News why Dallemand must go!

I remember so well Atlanta’s J. Jerome Harris, Clayton County’s Joe Hairston, DeKalb County’s Johnny Brown and Crawford Lewis, Cobb’s Strelic (who lasted only about two months, if that long, once the powers-that-were found out about his financial improprieties in Oklahoma) and Tocco, Fulton County’s James Fox, Stephen Dollinger, VanArsdale, and Jamie Boy Wilson.  Now, I think that arrogance is just in the drinking water in the Fulton County Superintendent’s office.  Heck, in Clayton County, have personally dealt with about a dozen superintendents.  In Atlanta, with about seven or eight.  In DeKalb, with only five.  These superintendents come and go.  They come to town with all the answers, at least in their minds.  They are usually arrogant and are willing to pack their suit cases and travel to and fro across this great land to be able to exercise their power, to scare their subordinates, to reap unconscionable monies and benefits, and to live in their conference-going and reception-attending artificial world wherein they take care of one another in the Great Superintendent Re-cycling Bin when they are fired or run off in one school system so that they can be contracted by a search firm (or, Glenn Brock in Georgia!) to pimped out to another unsuspecting and naïve school board.  In my opinion, these plastic and phony superintendents are sick jokes.  Just look at people who end up as superintendent!  Edmond Heatley, Romain Dallemand, Jerry Bell!  Ha!  I don’t know on their own merits if these guys could get elected as an officer in an elementary PTA.  But, being willing to play a role in these Appointed Superintendent Search (ASS) Committees and being willing to traipse all over the state or country so that the proprietors of these so-called “search” committees can make shocking amounts of money off the public largess called “public education,” these rather benighted boobs are then appointed as the next educational messiah for a particular school system. 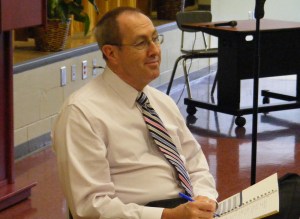 Thanks, Glenn Brock, For Bringing Us Some Real Characters!  Ha!

It’s all a game.  The first year, people are still breathing the false oxygen of hope.  The second year, the grumbling began to emerge.  The locals are put out with the rank incivility of these boob-superintendents.  They have the personalities, to quote of my grandfather, of small sacks of shit.  The local educators and citizens grow to detest the new superintendent.  The third year, the honeymoon has completely unraveled, and the school board members are now murmuring among themselves because they are getting such negative feedback from the community.  These appointed Gypsy Superintendents last three years or less, on a national average.

Of the extant superintendents, Bibb County’s Romain Dallemand and Clayton County’s Edmond Heatley were certainly among the worst in Georgia.  Heatley came from California and Dallemand came most immediately from Minnesota.  They were both named by me to the Superintendent Clowns of America.  Other illustrious members are Atlanta‘s Beverly Hall, Hart County‘s Jerry Bell, and DeKalb County‘s Crawford Lewis.  They keep falling one by one.  I love helping bring down these arrogant and benighted boobs who appear to have kissed their way up the corporate ladder to become superintendents, apparently intent on inflicting stress on those who don’t kiss up to them.  Nearly all of these men and women got on the list of the Appointed Superintendents Search (ASS) Committees because they were kiss-ups.  But, once they secure their superintendency, they feel that it is now time for others to kiss their asses.

I hope that this article gives you some explanation of how this process works.  This is why we end up with so many insipid individuals as superintendents of schools.  It’s really about the control and the money.  The powers-who-be control who gets on the list for the Appointed Superintendents Search (ASS) Committees.  Now in Glenn Brock’s case, he brings just one candidate to the unsuspecting school boards, and once the school boards hire his recommendation for superintendent, then almost invariably Glenn Brock’s law firm, Brock Clay of Marietta, either becomes the full time school attorney firm or at least gets part of the legal action.  I am trying to tell you that it’s all about the money, and Glenn Brock has found a good gig in this public educational industry. © GTSO, August 30, 2012.

2 Responses to Benighted Boobs as Superintendents! How Do We Get Them? Here’s the Story!