Free Up Teachers To Teach!

Posted on January 11, 2011 by thegeorgiacitizen

I recently opened up the newspaper at lunch and saw the headlines and was pleasantly surprised at how the The Atlanta Journal-Constitution(AJC) was actually beginning to uncover what so many of us have known about for years. We at MACE have been howling like a lone wolf about the systematic cheating going on in the schools, especially the urban school systems where they feel so much pressure about the standardized test scores. Every time that I would hear some “success” story (like the “success” story about Parks Middle School in Atlanta), I just roll my eyes, knowing that SYSTEMATIC interventions (i.e., cheating) was taking place. The Law of the Large Numbers does not change. This is a fact, Jack. Standardized test scores have a one-to-one correlation with free and reduced lunch counts (or any other measurement of socio-economic status). You can take a high school athlete who runs a 6.25 forty yard dash and give this athlete the best coaching possible for three months, but when you time his forty speed again, he will not be running a 4.35 forty.

Am I saying that poor students cannot learn? Absolutely not. But, the Law of the Large Numbers has demonstrated time and time again that the students from very poor economic backgrounds, as a group, continue to score lower on standardized tests than students who are from wealthier families and who have, all of their lives, had the fortune to have been academically nurtured (from Hooked on Phonics, et al., their whole lives). For children who come to school with virtually no reading and verbal readiness skills, it is like running the 100 yard dash and starting 20 yards behind the other runners.

There are, of course, exceptions to any rule, but the exceptions themselves are what establish the rule. About Atlanta: Beverly Hall and her minions are educational thugs. I have no doubt that the AJC has just unearthed the very tip (just the tip) of the Cheating Iceberg. I have dealt anecdotally with many teachers of Atlanta who have told me war stories about how they raise questions about dubious practices and had their contracts non-renewed but those teachers who went along to get along were rewarded for their submission. I have always told people that Atlanta is the worst of all the school systems in Georgia. It is the hub of corruption. It is an academic cesspool. But, quite frankly, the powers that be through the years have been reluctant to deal with Atlanta because they are squeamish about the race issue. They are afraid of being called racists. So, I supposed it is O. K. to mess over thousands of children of color because you are afraid of being called a racist, heh? Balderdash! Atlanta’s schools are rife with miscreant “students” who refuse to obey their teachers; in fact, they actually intimidate their teachers, and the Beverly Hall Administration allows this to occur. We always say at MACE: You cannot have good learning conditions until you first have good teaching conditions. When children are not expected and are not required to behave in school, this is what is racism. You don’t have to systematically cheat on tests if good learning conditions were first established in the schools. Even though the composite test scores may never be as high as the scores in Alpharetta and Crabapple, at least the group test scores will be accurate, and some of the students will score very high (and their scores will be real scores and won’t be cheapened by the fact that they are students in Atlanta City or DeKalb County).

I have detested the whole standardized testing mania. I have compared the school systems obeisance to the standardized testing mania to bowing down to the Idol of Baal. Standardized Tests have become false gods which have made caricatures our of educators. I understand the pressure felt by the superintendents in large urban school systems. Money, grants, embarrassment, reputations, ridicule, bonuses from naive and eager school boards, etc., are all tied to the tests which really mean nothing. The school systems should be able to go back to the non-pressured and generalized achievement tests administered to students just once per year to help the educators to gage where a student is in reading or math. The SAT and ACT will always be there. But, since The Nation At Risk came out in 1983, our schools have actually gotten worse! All of the gimmicks which the states and the federal governments have come up with (especially disasters like George Bush’s and Ted Kennedy’s No Child Left Behind) have been totally counter-productive when it comes to children actually learning how to learn. Everything has been reduced the tests becoming the curricula. Weighing a pig over and over will never fatten up the pig. The pig has to be fed and fed a lot! This whole testing mania is as stupid as trying to teach a Kobe Bryant how to play basketball by having him to fill out a basketball scorebook over and over, and when he makes a mistake, we go back and erase his mistake and make sure that a correct answer is put in its place. Making Kobe Bryant correctly fill out a scorebook instead of tossing him a basketball and allowing him to PLAY is sheer stupidity. The same thing goes for LEARNING. Let the children LEARN. We should quit making the children just regurgitate stuff on the standardized tests and allow teachers to engage the students in creative and meaningful ways so that real LEARNING can take place. Cookie-cutter pedagogy that has been in vogue for the last 30 years has strapped teachers in metaphorical straightjackets. Teachers need to be allowed to be creative and should be allowed to trust their own professional knowledge, judgment, discretion, and wisdom. Treating teachers like they are tall children certainly inure good learning conditions.

In the current testing craze, students are bored and disengaged, teachers resent being forced to use standardized teaching methodologies and scripted curricula with snoopervisors breathing down their necks, and the students aren’t really LEARNING. For children’s sake, we should allow teachers to teach! (c) MACE, February 11, 2010. 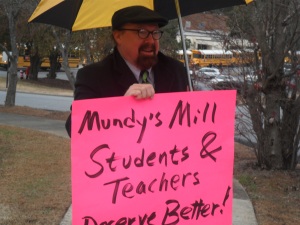 For children's sake, free up teachers to teach!